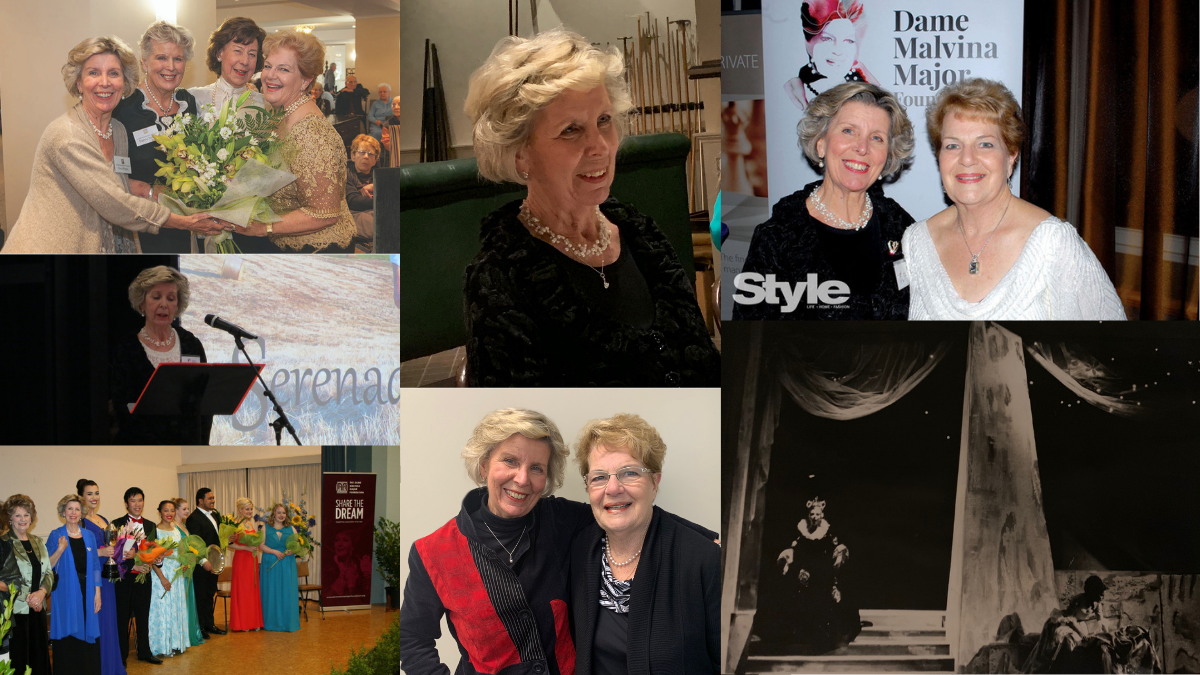 The former singer’s relationship with the Foundation stems from a long friendship with Dame Malvina, which began in London in the 1960s. Anna, who performed under the stage name of Alexandra Gordon, was studying at the London Opera Centre under a Friends of the Royal Opera House scholarship. Both were former students of Dame Sister Mary Leo.

“Anna and I met at London Opera Centre around 1965, and we became firm friends,” says Dame Malvina. “We did the Magic Flute together – she was the Queen of the Night and I was Pamina.”

Dame Malvina says that when Anna and her husband Vernon returned to New Zealand in 1998, Anna offered to help her with the Foundation.

“Somehow she formed the Christchurch Committee and set about teaching us how to raise money. She was a natural at putting on fundraising concerts and running charity golf tournaments, and connecting with corporates like Ryman Healthcare. She started the Arts Excellence Awards, and shared her knowledge with other committees around New Zealand as we got them off the ground.”

Anna says highlights of her time as Trustee and as Chair of the Christchurch Committee of the Dame Malvina Major Foundation include, as her first task, organising a fundraiser to help pianist Kirsten Simpson (now Robertson) to meet her deadline for acceptance at the Royal College of Music, London as she had a shortfall of $12,000.

“At very short notice we hosted a concert and raised $12,500. Kirsten left for London two days later and I still have the letter of gratitude that she sent.”

She has also taken great pleasure working with Ryman Healthcare management to deliver showcase concerts at their various homes, hosting Dame Malvina Major Foundation golf tournaments at Clearwater Resort and Terrace Downs, and concerts to raise money for the rebuild of the Isaac Theatre Royal following the Canterbury earthquakes and to celebrate its restoration.

Another highlight – in 2011 – was holding the first Pacific Opera Programme in New Zealand, in Christchurch, with the support of Dame Malvina and the Foundation, the Kia Ora Foundation and University of Canterbury. An intensive programme for voice students and repetiteurs led by Directors of the San Francisco Opera, Anna says this led directly to opportunities in San Francisco for Darren Pene Pati and Amina Edris.

Dame Malvina says she is sad to see Anna retire as a trustee, but happy that she still feels able to chair the Christchurch committee. “She is invaluable.”

Anna says she is excited to see a new generation of gifted trustees who have agreed to give their expertise to continue the work that Dame Malvina started.

“Many of the young people who have benefited from the support of the Dame Malvina Major Foundation are now ready to support the next generation thus making the aims of the Foundation an enduring legacy. For my part I am so grateful that Dame Malvina allowed me to share in her vision.”