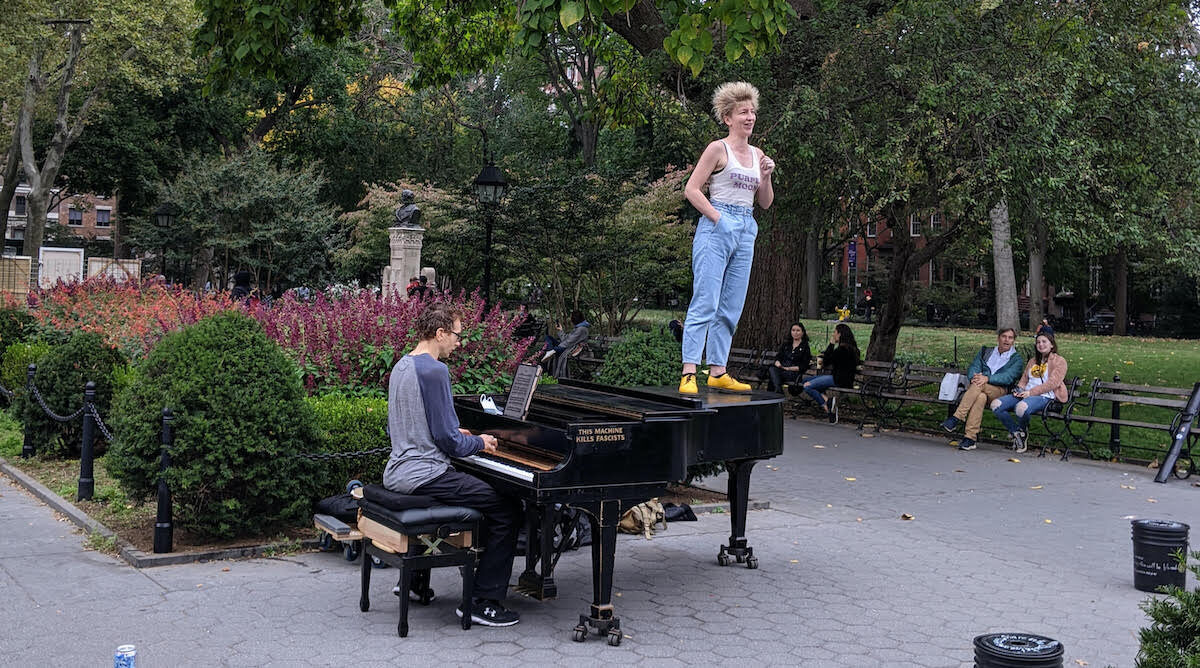 New York based DMMF artist Elisabeth Harris shares the unexpected joy, and what an altered, but still meaningful version of success has meant to her during 2020.

To say that the past year has been surreal, is definitely an understatement. New York has gone from a buzzing metropolis, to a city defined by sirens echoing in the empty streets, to a strange holding pattern where nothing is quite normal, but the end to all this madness feels as though it is perhaps, finally, imminent.

I don’t think any of us realised, when this time last year, our Carnegie Hall concert tickets were cancelled and the Metropolitan Opera went dark, that this reality would continue for weeks, and then months. We thought that the virus would be swiftly controlled, contained, exterminated. Yet here we are, still wearing masks whenever we leave the apartment, wary to stand too close to strangers in the subway, unable to see friends, to hug people and dine inside restaurants. And it has been interesting to note how our priorities have shifted; how perhaps what used to be the most important things have taken on new meaning as we have lived a simpler, smaller life. We have developed new traditions, found innovative ways to communicate with people and felt so grateful for our health, our jobs and ability to continue living in the city we now call home.

What a time to be a musician and performer though! Prior to lockdown, I had the wonderful opportunity to sing Orlofsky with Opera Project Columbus in Ohio. This was my first professional American singing engagement and I was so excited for this launching point into what I hoped would be a year of reaching out to other US Opera companies, more auditions, performances and perhaps finding an agent. Instead, I am happy to report that I have found other ways to still use my voice and engage in the music scene in New York.

The first project I worked on was in response to the Black Lives Matter movement. A classmate from Manhattan School of Music reached out to my graduating class of 2019 and together we collaborated on a virtual performance of ‘Were you there when they crucified my Lord?’. I was also delighted for the opportunity to record part of my role of Ludmila with the Bronx Opera company for a promotion event they did with the New York Public library. The company is hoping to put on this opera at some point during 2021 and I can’t wait to still be involved!

Perhaps the most exciting singing endeavour of last year was performing outside at Washington Square Park and the Elizabeth Street Gardens in October. There is a local pianist, Colin Huggins, who is very well known here in Manhattan for playing minimalist Phillip Glass pieces. Colin owns a grand piano and has been, for a number of years now, wheeling it down on the weekends to Washington Square Park. He sometimes collaborates with singers, and so, along with a couple of singers from MSM, we performed all the favourites from the opera repertoire. It felt so special to sing in public again and I can only hope that 2021 will yield more opportunities like this as we slowly move back to concerts and performance venues reopening.

Alongside my own singing, another intention of 2020 had been to develop a voice studio in New York. For as much as I am personally driven to perform, I have a real passion to continue teaching others and to share all that I have learnt, and continue to learn, from the incredible teachers, coaches and directors with whom I have been fortunate enough to cross paths. A step toward this has been joining the New York Singing Teacher Association (NYSTA) community. It is so wonderful to be teaching singing again, and although I want to resume in-person lessons as soon as it is safe to do so, I am learning a lot about adapting to the differences of remote teaching.

With this year full of the unexpected and more time than usual, I wanted to be able to make a small difference in my corner of the city. I reached out to an organisation called Pathways who offer a mentoring program for Hispanic youth from predominantly low income first generation immigrant families. Akin to the teaching, this has been such an invaluable part of my week and it’s so exciting to see how my mentee, a 13 year old girl called Destiny, has opened up and is gaining confidence from our interaction together.

As I end this update, I would like to offer my sincere thanks to those of you who have reached out to me this year. It has meant so much to hear from you – please continue to keep in touch! It is a great wish of mine to have more music news for you in the future and to be able to easily travel back to New Zealand to sing once again. Until then, I shall leave you with an unaccompanied rendition of ‘Hine E Hine’ from my Masters recital. These lyrics aptly call us, in spite of weeping and weariness, to be sad no longer.