Experience of a lifetime 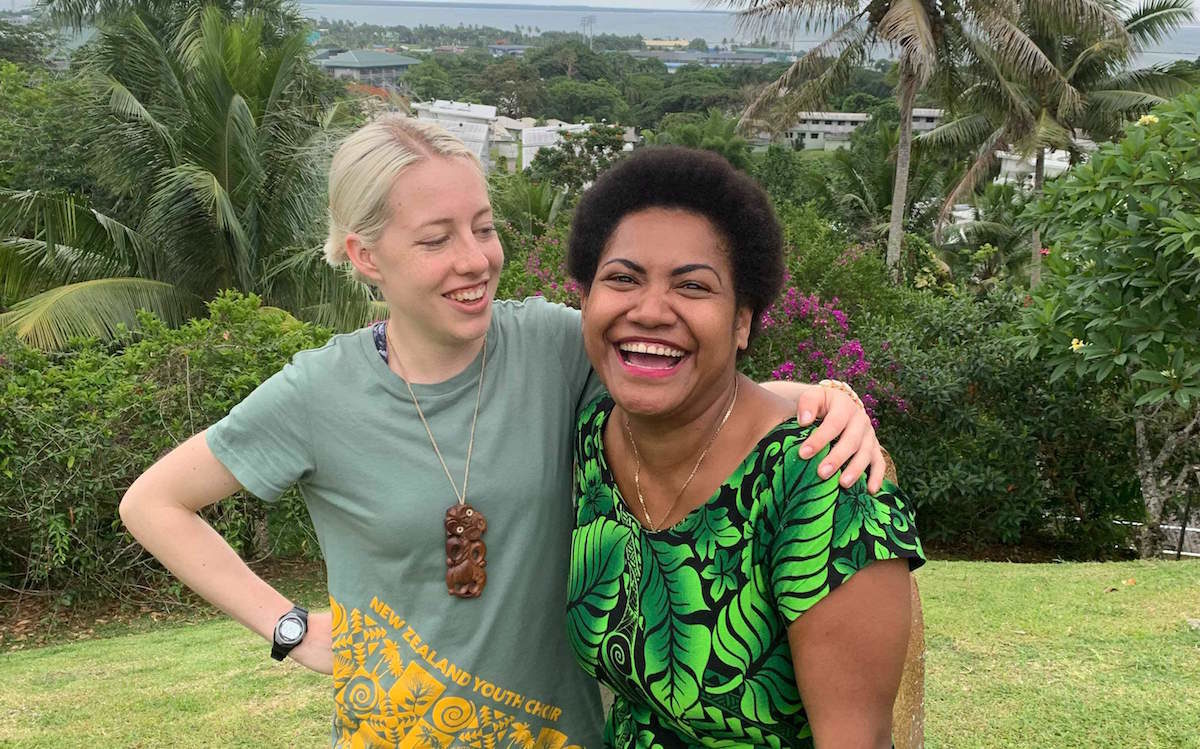 DMMF Taranaki Arts Excellence Award recipient Lauren Nottingham recently took part in the New Zealand Youth Choir’s Choral Tour to the Pacific, as part of its 40th anniversary. She says it was an experience of a lifetime.

“We began the tour on December 5th in Auckland. It was like a family reunion, where alumni from the past 40 years came to Auckland for a weekend of reconnecting through singing and celebrating together. We had a farewell concert in Holy Trinity Cathedral, which included a few massed items with NZYC alumni over the past 40 years. It was amazing for me to meet some members from the very first Youth Choir from 1979. I was watching them altogether laughing and hugging and I knew that was definitely going to be my choir friends and me in 40 years. The alumni came to the port of Auckland shortly before we departed on the MS Maasdam cruise ship and we sang to each other as a farewell; the current Youth Choir from the ship’s deck, and the alumni from the port. It was such an emotional moment and I couldn’t stop crying!

The first stop was a few days in Tonga in Nuku’Alofa and Vava’u, where my highlight was meeting students in Nuku’Alofa from the Tupou Tertiary Institute for a workshop and cultural exchange. They performed a few traditional Tongan songs for us and we taught them a few Maori Waiata. Throughout the entire trip I was consistently reminded of how songs are inextricably intertwined with movement and dance to convey meaning. Music is almost always sound and movement combined, in Pasifika culture.

We then sailed to Niue, the rock of the Pacific, where we had a huge day planned including singing at the local primary school’s prize giving, a workshop with local musicians and a reception at the NZ High Commission. We all met at our usual meeting place on the ship that morning, in our uniforms and sunblock on, only to hear an announcement by the ship’s captain saying that disembarkation today was cancelled as the swells were too high to risk safely docking the tender boats at the jetty. We were all devastated, especially since we had a Niuean member in our choir who had arranged a traditional Niuean hymn especially for us to sing there. It was an emotional day, seeing the island right there, so close, yet not able to visit.

Our next stop was Fiji where we visited Savusavu, Suva, Dravuni Island and Port Denerau. My highlight in Fiji was in Suva where we participated in the Sunday morning service at a local Methodist Church. We heard how amazing the church choir sounded and our choir sang the Lord’s Prayer in Fijian. After the service we performed a concert in the church and Fiji TV were there filming us. The church members organised what could only be described as a feast fit for royalty following our concert. We all sat in long trestle tables and they served us as guests the most amazing traditional Fijian food that they had prepared as a community, before finally serving themselves. The kindness, generosity and humble nature of those people really impacted on me particularly that day, but throughout the trip as a whole.

The final two stops were New Caledonia in Tadine and Noumea, and Sydney, Australia. In Noumea we sang an outdoor concert in Coconut Tree Square with local choir Amadeus. We sang a French piece with them and they had learned the Waiata we had given them (Ka Waiata Kia Maria) off by heart! In Sydney we performed our final concert of the tour on the 23rd of December in St Andrew’s Cathedral, which had a beautiful acoustic, before flying our separate ways home to our families just in time for Christmas.

Life on board the cruise ship was so amazing and also what made the tour so special. We performed three concerts in the ship’s showroom as part of the ship’s onboard entertainment over those three weeks. The tour struck a great balance of work and fun as even though we were travelling from place to place, we never had to lug our suitcases anywhere and take many buses and flights to get from place to place. There was time to catch up on sleep and relax on the cruise ship if we were feeling tired. The other cruise passengers absolutely loved having the choir on board and we had a bunch of loyal fans from the very beginning who always followed us off the ship to watch us perform on the islands.

Therefore this choir tour has impacted me in many ways I never would have imagined before I set off. The funds granted to me by the DMMF Taranaki Committee was so gratefully received and I hope you feel that it was put to good use. Thank you ever so much for supporting me over many years. I am indebted to the Foundation and I hope my work on the Wellington committee is a small way in which I can attempt to repay DMMF for everything the Foundation has given me.

Thank you for giving me the means to experience the tour of a lifetime!