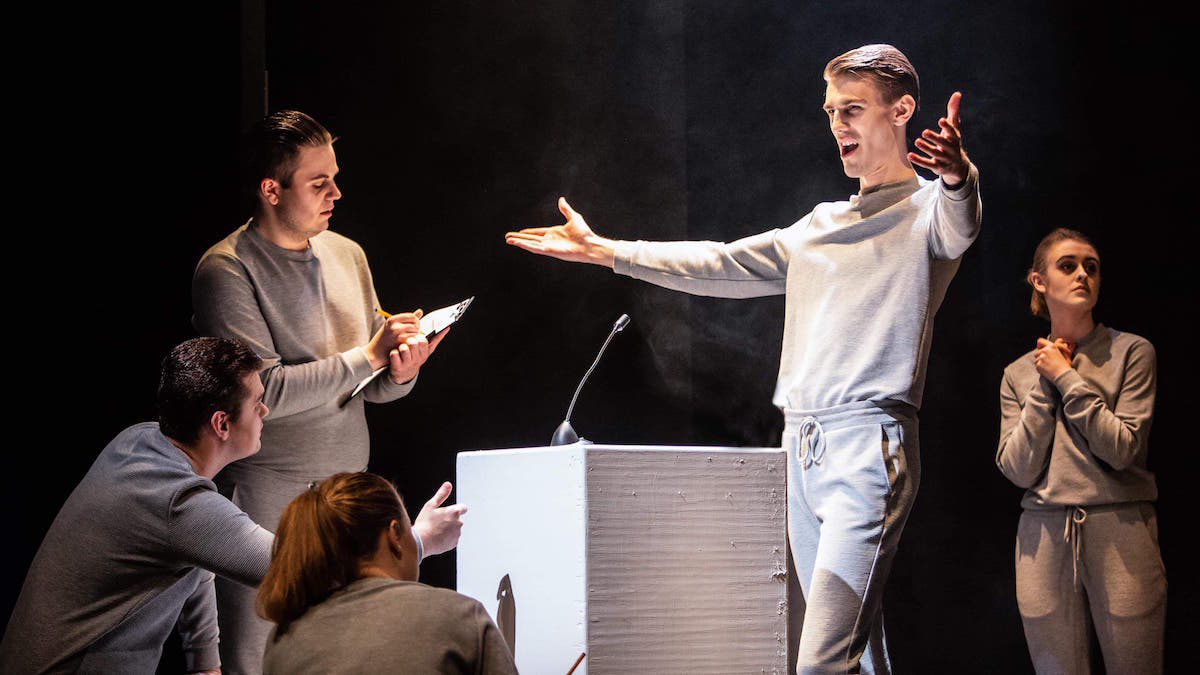 As Derek Stevens in the world premiere of Sane and Sound

Jonathan Eyers has just completed his first year of his Master’s London’s Guildhall School of Music and Drama.

“The first year of my Masters at Guildhall has been very busy and extremely rewarding. I am glad that I am going to Guildhall, as it is a very supportive School that also challenges me to strive to be the best all-rounded artist that I can be. Guildhall has a strong focus on further developing technical and artistic abilities, breadth of repertoire, creative output and professional experience. The vocal guidance I am currently receiving from my teachers Robert Dean and Stephan Loges is very technically focused, which is exactly what I feel that I am needing now. My teachers and I are happy with the progress that I have already made over the past year, particularly pertaining to the top of my voice and the consistency or resonance throughout the voice.

At Guildhall there are weekly classes in Italian, French, German, and English diction, which are extremely useful, especially when working on specific repertoire. We have weekly drama and movement sessions, which are vital skills to hone to become a complete performer. We also have regular Performance and Professional Skills sessions where professionals give talks about different facets of the industry, and some give fantastic masterclasses. Throughout the year I have also had the invaluable opportunity to sing in masterclasses and coachings with Dame Emma Kirkby, Michael McMahon, Tobias Trüniger, Jonathan Swinard, and Jordan de Souza.

One of the things which makes Guildhall stand out as an institution are the number of projects that are offered. The first of these came after only a few weeks, which was the Zarzuela project. Zarzuela is Spanish operetta, and this project consisted of six singers singing solos, duets, and ensembles from this extensive repertoire. I had never worked in Spanish before and had never heard of the Zarzuela style, so I was very excited to be involved.

My next project in February was Swansong, which is a semi-staged project based on the Schubert song collection Schwanengesang. This was a collaborative theatre piece between the singing and acting students at Guildhall, interspersing Schubert’s songs with monologues by characters from his life, both real and imagined. There are not that many opportunities to work with the Acting department that makes up the other half of Guildhall, so it was exciting to work with some of the actors. It was also a great pleasure to work on this project with one of the world’s leading song pianists Iain Burnside, as he was the creator of this project. I learnt a great deal about the singing of Lieder and the preparation and performance of art song from him.

At the end of May I took part in my final project for the year, VoiceWorks. This project was six months in the making, and involved singers being paired up with composers and librettists to create a new work for voice that is then performed in Wigmore Hall. I was paired with soprano Lucinda Scott, composer Ábel Esbenshade, and librettist Yashka Moore. The process was very collaborative with several meetings and workshops throughout the artistic process. The resulting piece was entitled The Menstruation Song, and was for Soprano, Baritone, and Alto Flute. This was a feminist piece that aimed at destigmatising menstruation and normalising everyday conversation about it. It was a fantastic experience, particularly having the opportunity to perform in Wigmore Hall, and was a highlight for the year. I think it is especially important to be working with composers and singing new music, as it is this music that will become the future of classical music.

I have also taken part in two Opera scenes concerts at Guildhall. The first was the Act 3 duet between Zurga and Leïla in Bizet’s The Pearl Fishers. It was a challenge for me to work on this scene, and it was especially useful as a learning tool to know how to prepare for the rehearsal room musically and dramatically. My next set of scenes in March was singing Figaro in the quintet from Rossini’s Il barbiere di Siviglia. This is certainly a role that I am hoping to sing in the near future, and it was such a useful experience to start exploring the character and makes me excited to continue learning the role in the future. I am currently rehearsing for the Summer Scenes concert, singing in the ‘Omelette Quartet’ from Le Coq’s Doctor Miracle. This scene is already proving to be a lot of fun, and I think with the addition of my character’s fat suit, it will be even better!

Guildhall has provided me with many opportunities to perform outside of the school. In December I was put forward to be involved in the London Symphony Orchestra’s production of Bernstein’s Candide, as part of the centenary celebrations of the composer. I sang several small roles in the performance, including Judge 3 and Crook. The cast included Sir Thomas Allen and Anne Sofie von Otter and was conducted by Marin Alsop. It was an incredible experience to be able to work and learn from some of the most talented performers of their generations and to sing with one of the best orchestras in the world.

Guildhall also recommended me as a soloist to sing in Vaughan Williams’ Fantasia on Christmas Carols with New Malden Methodist, and in a concert of Bach cantatas BWV 47 & 59 and Mozart’s Missa Brevis, K. 59, in Stjørdal, Norway. Going to Norway was a highlight as I travelled and performed with some amazing new friends from Guildhall, and I had never seen so much snow before! I am very grateful to Guildhall for providing me with opportunities to perform outside of School, as they make me extremely excited to be a performer and encourage me to continue to strive to make this my career.

In April I was involved in a Guildhall CoLab project. It was a new opera called Sane and Sound by composition student Matt Geer, and centres around his experiences living with schizophrenia. The text was lifted directly from Matt’s diaries that he wrote while having schizophrenic episodes. It was a very intense rehearsal experience but also was one of the most powerful and affecting performing experiences that I have had so far. Fortunately, we will be performing the opera again in August at Grimeborn, a fringe opera festival in London.

I have just finished performing for Opera Holland Park as a member of the chorus in their productions of Puccini’s Manon Lescaut and Verdi’s Un ballo in maschera. Rehearsals began at the end of April with the season opening at the beginning of June. By the end of June, we had done nine performances of Manon Lescaut and twelve of Ballo. It has been a challenge to be rehearsing and performing two operas simultaneously, but it has been a wonderful experience. I have really enjoyed working on these productions. Having done chorus work with NZ Opera from 2014-2017, I know how valuable chorus work can be, and it has been a great opportunity to meet and work with singers, conductors, musicians, technical workers, and directors in the industry.

Although my first academic year may be coming to an end, the next few months are still very busy with performances. I am especially looking forward to performing at Grimeborn and with British Youth Opera. I am also really looking forward to going back to Guildhall next year to complete my Master of Performance, and there are already some very exciting projects lining up.”