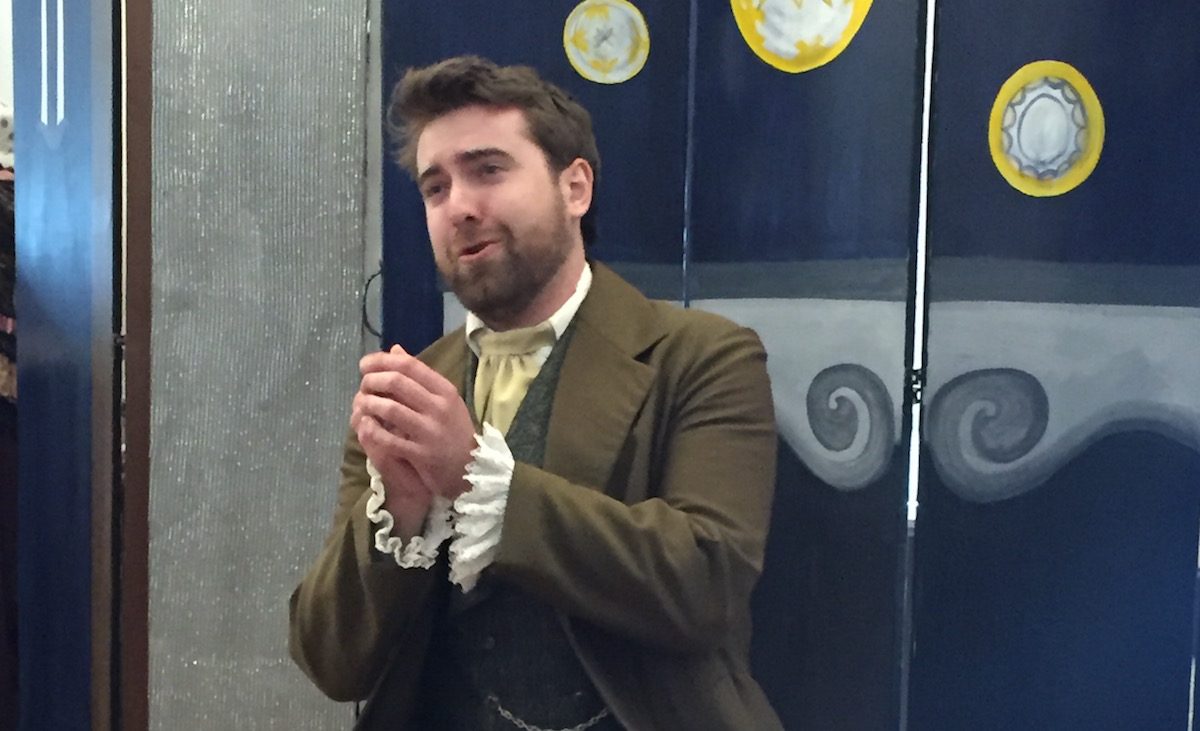 Former Dame Malvina Major Emerging Artist Christian Thurston settles into life in New York and his studies at the Manhattan School of Music.

“It’s been an eventful year for me so far – and I feel I have improved greatly in my short time in New York, and am very much looking forward to getting stuck into the second year of my Masters. It will also be nice to be back there not feeling like a tourist, and to have my bearings and accommodation sussed, not to mention having already made some strong friendships and bonds with my classmates and teachers. I am enjoying living in West Harlem.

Before Christmas I auditioned successfully for the role of ‘Pandolfe’ in Massenet’s Cendrillon, an adapted English translation, the season took place throughout April. This was a very special experience as we visited numerous schools with our opera, the most memorable for me being two Orthodox Jewish Middle Schools. I was involved in a similar production with the New Zealand Opera Dame Malvina Major Emerging Artists in 2014-2015 when we toured with a production of The Barber of Seville through schools all over New Zealand, and this gave me an insight into what was expected of me and how to relate to the students. Being given a second experience of this type of production was really great for me and made me realise that this is an aspect of the performing arts which is really important.

I was fortunate enough to have a Russian accompanist for this semester at MSM. I fell in love with the language when we studied it at NZSM and I enjoyed it at MSM because of this previous experience and knowledge I had gained from my studies in New Zealand and felt that this gave me a bit of an edge over the other students at school. Plus, I feel that Russian suits my voice well – the composers have so much emotion in their music and the setting to the poems is always so emotive and expressive. As well as that, the language itself lends so well to many of the techniques I have been working on, and this produces a wonderful challenge.

Something I have loved from my time at MSM that was unexpected for me has been Music Theory. There is a huge emphasis here on aural in the theory classes. I was incredibly surprised then, to find myself looking forward to these classes so much. My lecturer is Christopher Vassilades, and he is one of the most enigmatic teachers I have ever had. He’s composed numerous operas and musicals, and takes us through exercises in sight-singing from the piano – after which he will finish the exercise by breaking into a well known musical theatre number, ensuing a long class sing-a-long! This makes the classes memorable and bearable, and I have noticed my musicality and theory skills develop greatly under his tuition.

Another of my favourite classes at the school, which you may be surprised to hear, is dance. We study dance at MSM to prepare us for the many ballroom and street dance scenes in opera. The teacher goes by the name ‘Uncle Frankie’. He’s 68, 5ft, wears gold rimmed glasses and owns his own ballet company. From my first class with ‘Uncle Frankie’, he spotted my kiwi mannerisms immediately. He says to me often in front of the class – “you can take the boy out of New Zealand, but you can’t New Zealand out of the boy!”

We have studied many different forms of dance, from the classic Waltz to the Polka, and have even studied elements of ballet. I found the classes a refreshing break from the often very busy and studious days, and while I may not have been so light and graceful at the beginning of the year, I think it is fair to say that I am now a changed man, and I am extremely proud to say that I was awarded the highest mark in the class for the semester.

My lessons with James Morris have been great, and I feel that we understand each other well. I feel I am improving and this was confirmed in my Jury at the end of the semester, an assessment which every singer has to do. You have to submit six pieces, and pick one to sing yourself and the panel picks the second one. Rather than a graded assessment as such, this determines whether you have improved enough to continue into the second year of the Masters programme. Not only did I receive a good mark, but I was awarded a small scholarship for the second year, which as you know, makes a big difference and will assist me with the huge costs associated with living and studying in New York.”