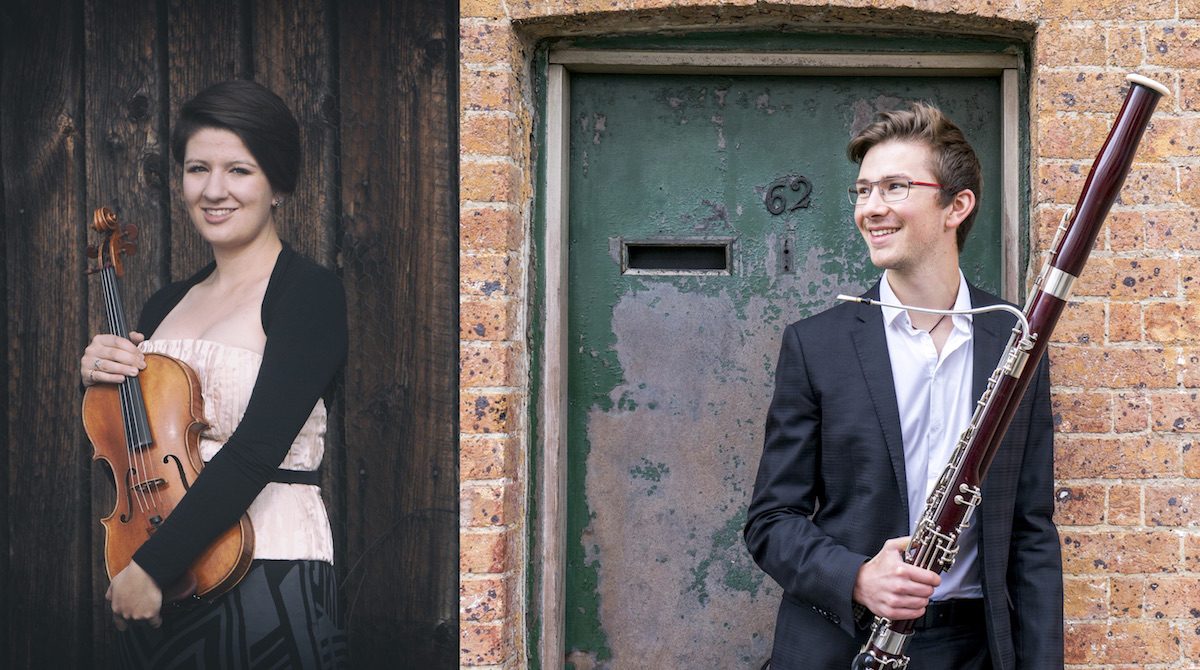 Siblings and DMMF artists Bryony and Todd Gibson-Cornish may be pursuing separate performing arts careers, but they share much success – and most recently the Royal College of Music’s prestigious Tagore Gold Medal.

The medal is awarded each year to the two most deserving students, one female, one male, who are judged to have made outstanding contributions musically and in other important ways to the life of the Royal College of Music. Todd and Bryony are both recipients of this medal, one year apart – Todd graduated in 2016 and Bryony in 2017.

In March this year, Todd was awarded the Tagore Gold Medal by HRH the Prince of Wales at the Royal College of Music’s annual President’s Visit. Todd performed for him as part of the ceremony, for which he invited Bryony to join him. Bryony will be receiving her medal next year and she is thrilled that the male recipient for 2017 is another New Zealander, Julien Van Mellaerts. He recently performed the Bridge Songs for Baritone, Viola and Piano with Bryony in London and the three of them have been friends for many years.

An update from Todd…

It has been just over a year since I moved to Sydney to take up the position of Principal Bassoon with the Sydney Symphony Orchestra. I moved immediately following my graduation from the Royal College of Music.

Over the past year I have loved every minute spent with the orchestra! It is such a great city to live in and my colleagues in the orchestra are wonderful. Some highlights since I started have been working with conductors such a Pinchas Zukerman, Vladimir Ashkenazy, Charles Dutoit and our chief conductor, David Robertson. I have also been performing with the Sydney Soloists.

I have also travelled back to London a couple of times throughout the year to work with the Philharmonia orchestra, including at the Proms, with Esa-Pekka Salonen. I also had the opportunity to play with the London Conchord Ensemble and give some workshops at the Royal College of Music.

It has been a whirlwind year so far, so I’ll attempt to recount some highlights!

I had a wonderful trip to New Zealand, where I did a residency at my old high school, Rangi Ruru Girls’ School. I spent four days working with the music students there in chamber music coachings, lessons and workshops and this culminated in a solo recital that was also a fundraiser for their newly launched music programme, Stellar.  I also travelled to Wellington and recorded “When Gravity Fails” by Philip Norman, as part of the NZ Composer Sessions in partnership with NZSO, RNZ Concert and SOUNZ. It was heart-warming to reconnect with so many former colleagues and I loved playing as a soloist with the NZSO.

I returned to Prussia Cove for more masterclasses with Thomas Riebl and this year, I went officially as the Antipodes Duo with my pianist, Gamal Khamis. We had a fantastic time and subsequently performed recitals at the Victoria & Albert Museum and St James’s Piccadilly, as well as other UK venues. This all culminated in my final recital at the RCM, in which I performed Bach’s Chromatic Fantasy, Schumann’s Märchenbilder, Hindemith’s Opus 11 No. 4 Solo Sonata and selections from Romeo & Juliet by Prokofiev. I also had the opportunity to perform the Prokofiev with Gamal in the RCM’s String Showcase: “Dance Moves” in the Wigmore Hall – it was very special to have the opportunity to play in this wonderful hall again.

I have also been doing a lot of chamber music: I was involved in another student and professor collaboration concert at the RCM and I also had the pleasure of collaborating with the RCM’s Artist Diploma Quartet, the Alke Quartet, in a concert in Woodbridge. Another fun collaboration was the Schubert Octet, which involved a number of professors and students. It was particularly special for me because of presence of my dear brother Todd, who played the bassoon! I am very excited to share that I will be able to continue my love for chamber music, as part of the Marmen Quartet, a group that formed at the RCM five years ago and have since established themselves as an emerging quartet, holding various residencies including Music in the Round’s “Bridge” Scheme. We will be completing an Artist Diploma in Chamber Music at the Royal College of Music next year, so I’m very happy to continue my association with the RCM.

My orchestral career continues to progress, with new trials for Co-Principal with both the Royal Philharmonic Orchestra and English National Opera. These positions would be dream jobs for me, especially as I would still have time for other areas of music alongside these positions. My trial with ENO began with thirteen performances of Carousel, where I played principal for all of the performances. That was a great introduction to the orchestra and I’ll be playing with them again in a run of Aida starting in September. My first engagement with the RPO was the Ten Pieces Prom and I look forward to more performances with them after the summer. I have also continued freelancing with the English Chamber Orchestra and Orpheus Sinfonia and I have started working with the Britten Sinfonia, Orchestra of the Royal Opera House and the English Baroque Soloists as well.

I am very grateful to the Dame Malvina Major Foundation and of course Dame Malvina for their support over the years – it has been an amazing journey so far and I can’t wait to see what the future holds! I hope that my gratitude will show through proudly representing the Foundation and New Zealand on the world stage in years to come