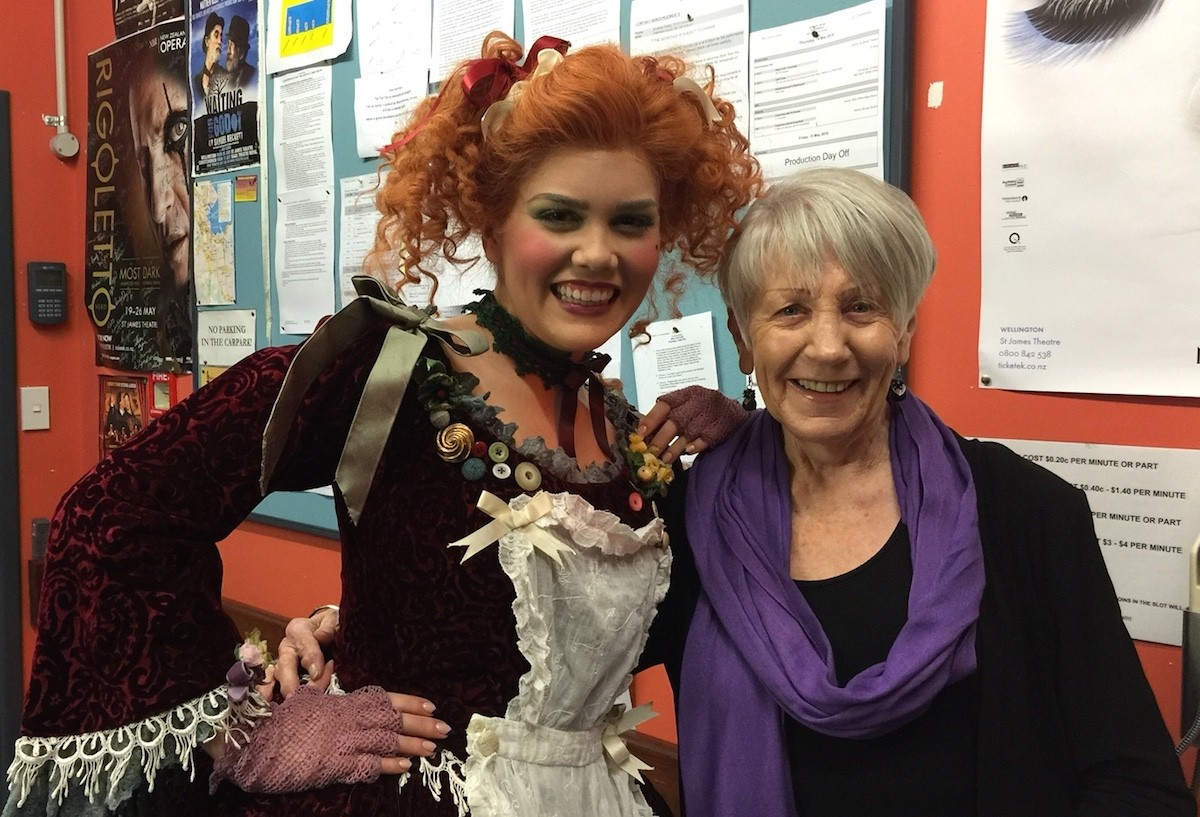 Dame Malvina Major could be considered the fairy godmother in a match between two Wellington opera singers.

Sopranos Amelia Berry and Angela Gorton (née Shaw) each played the role of Clorinda, one of Cinderella’s step-sisters, in the last two New Zealand Opera productions of Rossini’s La Cenerentola(Cinderella) in Wellington – over 50 years apart.

Ms Berry, who grew up in Kilbirnie and Titahi Bay and studied at the New Zealand School of Music, said playing Clorinda in the current NZ Opera production has been a lot of fun.

“I don’t often get the chance to sing a truly comic role, and I have relished the opportunity to make all the ugly faces that I can’t use in my more serious roles! It’s also fun to find new ideas to play with each night. That’s the beauty of live theatre – you can really experiment with every performance and add new layers.”

Mrs Gorton, who lives in Ngaio, performed Clorinda in the 1964 touring production of La Cenerentola which played at the Victoria University Memorial Theatre. Her lasting memory of the role was the challenge of having to sing the Italian opera in English.

“The old NZ Opera Company had a policy that its operas would be sung in English – sur-titles were certainly not a feature in the 1960s. It was quite a task singing it in English and having to skip around the notes and deliver the words so that the audience would understand what we were singing!”

Mrs Gorton said the opera scene was very different back in her day. “When the singers of my era were invited to sing for Donald Munro’s NZ Opera company we learned in and through performance, there were no such things as vocal degrees and opera schools.”

“When the singers of my era were invited to sing for Donald Munro’s NZ Opera company we learned in and through performance, there were no such things as vocal degrees and opera schools.”

“Following seasons in the main centres we took opera to the people in smaller townships, with piano accompaniment. We travelled in all manner of vehicles with the set, which the male singers put up and took down. The costumes and props were the responsibility of the female singers. One year we did 126 performances of La Traviata from the top of New Zealand to the Bluff.”

Ms Berry agrees that the industry has changed a lot over the last fifty years.

“Right now the market is saturated with excellent young singers, but there are less jobs available and one has to work very hard to be noticed. Singers are expected to have the whole package – the ‘park and bark’ tradition has been taken over by a new age of performers who should be able to act as well as they can sing.

“The world has really opened up with travel, so singers tend to fly around a lot more and not be resident in only one company for a long time. Productions are often more experimental and innovative, but there is also a real demand for period productions with a difference.”

Meeting before the second-to-last Wellington performance of La Cenerentola, the pair were equally delighted at their step-sister connection.

“I first met Angela when she judged the Dame Malvina Major Foundation Wellington Aria competition in 2010. I won that year and her advice on my judging sheets was really intuitive and encouraging.

She has such class and is a great supporter of young singers, so I feel quite honoured to be singing Clorinda 50 years after Angela did!” said Ms Berry.

“NZ Opera’s La Cenerentola is outstanding. Visually the sets and lighting were quite beautiful, Orchestra Wellington presented a disciplined and stylish performance and the piece was well cast and consistent in musical clarity. Both the step-sisters sang beautifully and made it clear to us all in the audience that they were having a whale of a time!

“Amelia has always impressed me with the high standards she sets for herself, she is so dependable. I have confidence that Amelia will do well, as she has great potential, a lovely voice and is always so well prepared. I hope that she gets the opportunities she deserves.”

So much for the step-sisters being mean.