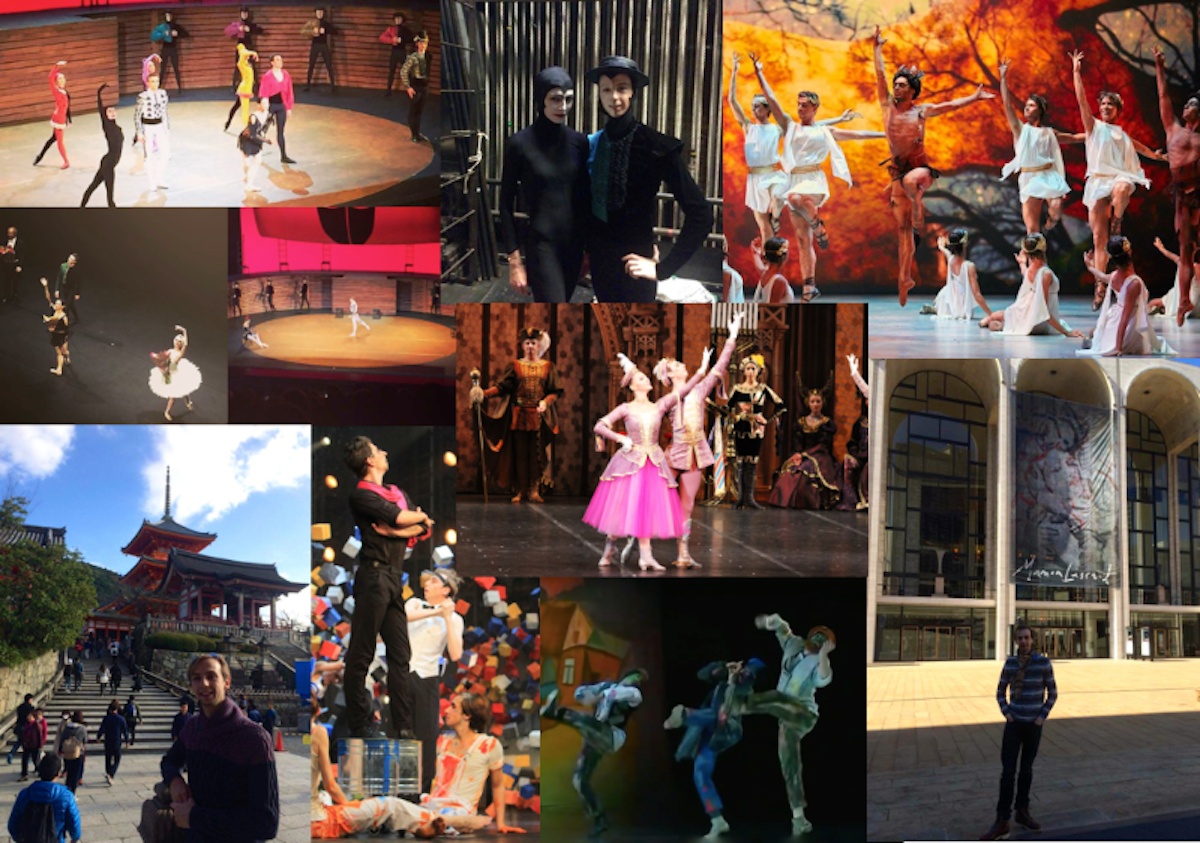 Cantabrian Arts Excellence Award recipient Tasman Davids has now lived quarter of his life in St Petersburg where he dances with the Mariinsky Ballet Company. Here he shares his latest adventures.

I’ve had a particularly exciting time since December. At Christmas our company toured Japan. We performed for a week in Tokyo in the theatre where Sylvie Guillem did her final retirement performance two days before we opened. The backstage walls of the theatre are covered in the signatures of everyone who has appeared there. It was a thrill to write your name beside some of the greats. We had full houses and standing ovations at each performance of Nutcracker or Giselle. It was a great tour and we even made it to Disney Sea World – my first Disney visit! I can also now add Fukushima to my list of ‘interesting’ places, which includes the Crimea, one of the first flights in after annexation, and Paris, one of the first flights in 36 hours after the ‘Bataclan’ attack.

After a season of Nutcracker in St Petersburg we danced at a gala in Switzerland and then for a week in Paris, our second trip of the season, this time with a more varied bill, including Paquita, Chopiniana and a modern work – The Rehearsal. We decided this time that we should ‘do’ the Eiffel Tower and had the added bonus and novelty of ice skating on the first level on a huge night time lit rink. It was beautiful!

When I got back to St Petersburg I discovered I was about to fulfil one of those crazy ballet dancer dreams of dancing for one of the world’s top companies. I was on the list to travel to New York to dance with the Mariinsky at a series of galas to commemorate Maya Plisetskaya at BAM – the Brooklyn Academy of Music, with Valery Gergiev conducting. (Russian companies share dancers sometimes.) The extraordinary part of this was that I got to dance Carmen with Diana Vishneva and Ulyana Lopatkina was also on the bill! I had one of those once in a lifetime moments during the protracted applause of thinking, “How on earth did I end up here?” It was an indescribable thrill. The schedule meant that we had time to do some sight seeing, including the Empire State building.

Now I am back in St Petersburg and dancing amongst other things, Swan Lake. I recently danced a character piece choreographed by Yacobson for the company’s anniversary gala – I can now say I have officially been a Russian Jewish Fiddler on the Roof in Russia!!! We are also rehearsing Sleeping Beauty which is being set by Jean-Guillaume Bart and ‘Etoile’ dancer from the Paris Opera.

On ANZAC Day I had hoped to attend the ANZAC service in St Petersburg that the NZ Embassy had invited me to, sadly I could not as I was dancing at the Dance Open International Ballet Festival the same day. It is one of the hottest tickets in town and people fly from round the world to watch the dancers who have been invited to dance from far and wide. Our company provided the corps de ballet for Walpurgis Night with Matthew Golding from the Royal Ballet, Covent Garden and Oksana Skorik a Prima Ballerina of the Mariinsky. It still amazes me that I get to work with people who were previously my Youtube searches and the best thing is that they are so welcoming, friendly and easy to work with. You really shouldn’t believe all that the media has to say about Russian ballet companies!

It is all manically hard work and six or even seven days a week at times, but I know how lucky I am to experience so much, to work with such amazing people and to travel around the world doing it. And I still love St Petersburg which amazingly has now been my home for a quarter of my life! I am looking forward to our company taking over the Mariinsky for the whole of August for what has become our annual season. There is nothing like dancing on such a revered stage!

Here are some links if you would like to while away some time: