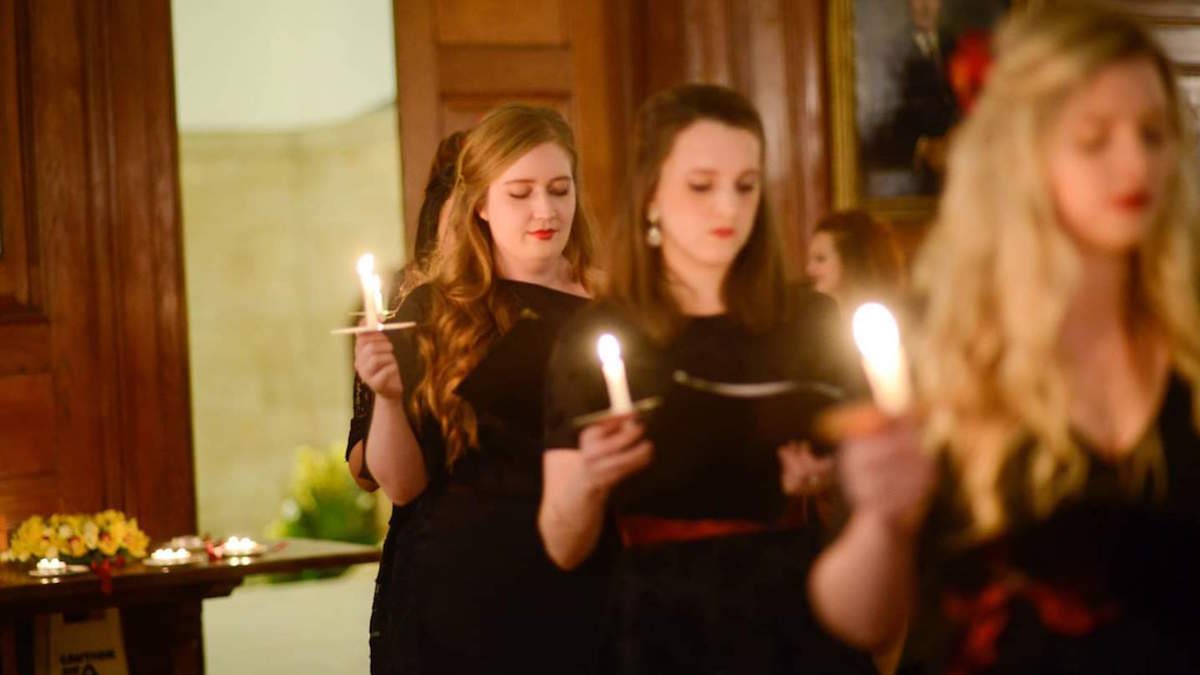 Former Dame Malvina Major Emerging Artist Katherine McIndoe has made it to the end of another term at Guildhall.

This term has felt a little bit like the calm before the storm, as I have spent most of the term auditioning for things coming up in 2019, and learning music ahead of performances coming up in the New Year. As always, I have been getting a lot out of my lessons with Yvonne Kenny, as well as my coachings and classes with all the staff here at Guildhall. Among the auditions that I did this term, I have been chosen by Graham Johnson to sing in a concert for his Song Guild in February: I am very excited to work with him, as I admire his recordings and writing so much, and I can’t wait to explore the repertoire he has chosen for me. I also auditioned for the Les Azuriales Young Artist Programme, to be held in Nice in the summer of 2019, and am very excited to have been offered a place!

It has also been a busy term of music at Goodenough College. We have so many New Zealand and Australian singers living at the College now (a lot of people seem to be genuinely confused as to how and why we’re all here!), and so Goodenough hosted a concert for the Foundation for Australia and New Zealand Arts (FANZA), for which we provided an evening of songs and arias. Many of us are also involved in a new all-female vocal ensemble at Goodenough, the Good Sirens, and we have performed two concerts so far in the beautiful candlelit surrounds of Goodenough’s Great Hall: the Pergolesi Stabat Mater with small ensemble, and Britten’s Ceremony of Carols with harp. Bloomsbury Opera, Goodenough’s opera company, has also chosen to put on Così fan tutte in February, and I have been cast as Fiordiligi – so it will be a busy couple of months preparing and staging the opera!

Through Guildhall, I had some fantastic performance opportunities towards the end of the term. The first of these was the chance to sing in a ‘BBC: Total Immersion’ concert, as part of the BBC’s WWI commemoration programme centred around Armistice Day. I sang a song cycle by Australian composer Frederick Septimus Kelly, in a concert of music by composers killed in action (Kelly died at the Somme in 1916). It was a very special event to be part of, and our performance was recorded and has recently been broadcast on BBC Radio 3.

I finished the term on a real high, as I was cast in a number of small ensemble roles in the London Symphony Orchestra’s semi-staged production of Bernstein’s Candide at the Barbican, conducted by Marin Alsop. Leading the cast were Sir Thomas Allen and Anne Sofie von Otter, and six Guildhall singers were chosen to take on many of the myriad small sung, spoken, and silent roles that make up Candide – within the show, I played a Bulgarian soldier, a waltzing Parisian, a horse, a Venetian gambler, and (perhaps my finest moment) a bleating El Dorado sheep. Throughout the process, I completely fell in love with the piece (so mad and imaginative!), and also gained a lot from being part of the process with such an incredible orchestra, conductor, cast, and director. Singing the final number, ‘Make Our Garden Grow’, with the full force of the London Symphony Orchestra and Chorus was a very special experience, and it will stick with me for a long time. It was also a lovely added bonus to be sharing the stage with three other Kiwis (two of whom are fellow NZSM alumni)!

As soon as Candide was over, I was into a week of auditions, and back to learning my role in Così. I am also starting to learn a lot of contemporary music for projects coming up in 2019. Through Guildhall, I am involved in a project of music by Scottish composer Judith Weir, and I will be singing a piece called King Harald’s Saga, which is a ‘grand opera in three acts for unaccompanied solo soprano singing eight roles’ (the subtitle) – which is an extraordinary piece but will take a lot of work! I have also chosen to stage an opera by Dominick Argento for one of my assessments: it is a monodrama for soprano called Miss Havisham’s Wedding Night, and is a 35-minute piece in which the Dickensian Miss Havisham spends a ‘dark night of the soul’ lamenting her abandonment and descent into madness… I’m very excited to tackle this piece, and am working with a director and fellow student at Guildhall, Simone Ibbett-Brown, to bring it all together.

As ever, I am so grateful to everyone who has supported me in getting to London and the Guildhall, and I feel lucky every day to be learning and performing in this wonderful place. I hope everyone at home has a relaxing and sunny Christmas and New Year (as I’m writing this, I’m looking out the window and trying to delay going out into the freezing cold!), and I look forward to keeping you updated with my progress on this side of the world!

Best wishes and lots of love

An update from Bristol Old Vic