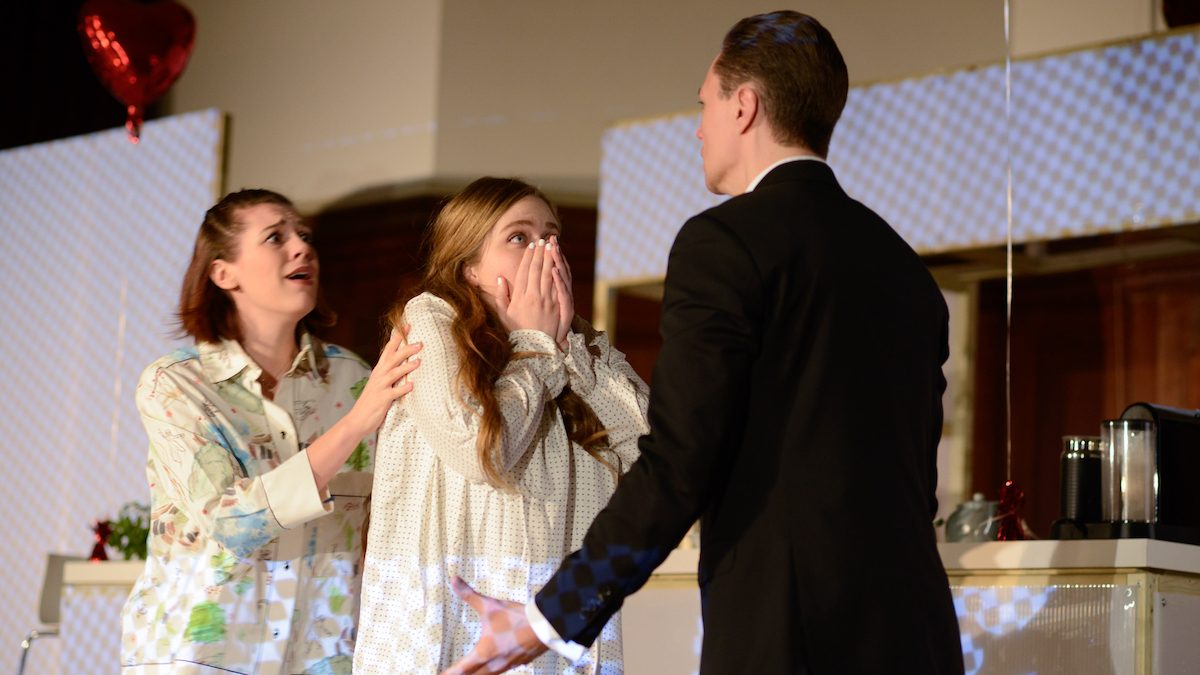 “Hello to everyone back home in New Zealand! We have just started back at Guildhall, and it is finally starting to feel like springtime. The last few months at Guildhall have been very busy and now (after a much-needed break over Easter) we’re back into the final term!

“During last term, I had the wonderful opportunity to perform two roles. One was Fiordiligi in Così fan tutte, which I worked on as a role study at Guildhall, and then performed in a production with Bloomsbury Opera (alongside many fellow Kiwis!). I was then cast as the Governess in a production of Britten’s The Turn of the Screw at the Barnes Music Festival – this was hugely exciting as I performed the role last year in a student production with King’s Opera, and was dying to perform it again! The production was a great success – unfortunately it was only one show as part of a festival, but it sold out, and was a really atmospheric night, taking place in a church with a lot of the (ghostly) action in the aisles between the pews… It’s a fantastic role and I’ve learned a lot from singing it – as I feel I will every time I come back to it. It was also very exciting news, around the time I was preparing the role, to learn that I have been accepted again into the Britten-Pears Young Artist Programme at Aldeburgh in June, to work on Britten’s song repertoire with Mark Padmore and Julia Faulkner.

I had a couple of great masterclasses last term, one with American collaborative pianist Martin Katz, and the other with Julius Drake, whose recordings I have listened to for a long time. I worked on Strauss and Korngold in both the masterclasses, and got so much out of them – one of the great benefits of the Vocal Studies programme at Guildhall has been the chance to work intensively on art song and lieder, and I really feel that I’m learning from the best! On that note, I was also involved in a project with Graham Johnson’s ‘Song Guild’, in which he devised a concert based around a modern setting for quartet of Shakespeare’s ‘Seven Ages of Man’, and curated a group of other art songs, both well-known and unusual, to fit thematically with each of the seven ages. It was an exciting project to be involved in, and gave me a lot of ideas about innovative programming.

I was also involved in a production of Opera Scenes in the last week of term, performing Mařenka in a scene from The Bartered Bride, and am now preparing for a final set of scenes in July: I will be singing extracts from Gounod’s Roméo et Juliette, including Juliette’s ‘poison aria’. Alongside the Gounod, I am preparing for my final recital in June, in which I will be performing works by Korngold, Britten, and Barber, and am also singing a small role in the Guildhall Opera Programme’s upcoming double bill, John Blow’s Venus and Adonis, alongside Handel’s Aminta e Fillide (in which I have a number of silent cameos…). I have also spent the last few months preparing one of the most challenging pieces I have ever worked on, Judith Weir’s King Harald’s Saga, and will finally perform it in a concert of her works at Guildhall in May. The piece is described as a “grand opera in three acts for unaccompanied solo soprano singing eight roles”, and is based on an Icelandic saga about Norwegian King Harald’s failed attempt to invade England in 1066. Since it is unaccompanied and the music is very complex, the learning process has been challenging (so much note-bashing…), but it’s a brilliant piece with lots of opportunities for character work. I was able to work on it with the great soprano Jane Manning, for whom it was written, and am looking forward to working on it with Judith Weir herself in a masterclass before the performance.

I am also getting ready for an exciting summer after finishing my Masters in July. Through being a finalist in the IFAC Australian Singing Competition last year, I gained a place at the Canadian Vocal Arts Institute Summer Programme in Montréal, so will spend a few weeks there in July, before travelling to Nice, where I will be a Young Artist with Les Azuriales Opera.

After the summer is over, I will be back in London and back at the Guildhall: I auditioned and gained a place on the Opera Programme, so will begin my Artist Diploma in September! I’m getting so much out of my studies at Guildhall (especially my lessons with my teacher, Yvonne Kenny), and am looking forward to continuing on with the next step. As always, I am so very grateful for the support of everyone at home, which has got me here and is enabling me to take the next step in my singing development. Thank you so much, and I hope you are all well!”